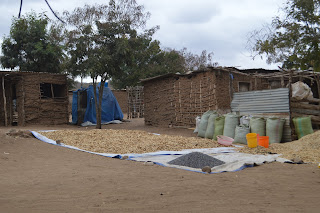 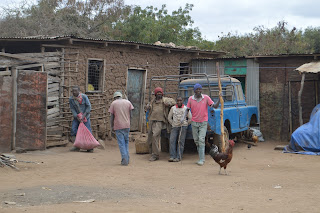 But there was a new mine, or rather, a hole in the ground where some mining took place a few years ago, and in which they now had discovered chrome green tourmaline crystals.  Production had started again two months prior to our arrival, they said, and they offered for us to come see the mine.  So we piled back into the van and followed a guide on a motorcycle up the hill along the various narrow roads that had been created by motorcycles and maybe a car once a month to bring supplies up or down.  A couple of times, we had to turn around and choose a different path because only the motorcycle could pass.  We got stuck one more time, but only briefly.  The cloud of dust created by the motorcycle got us dirtier and dirtier.  During a "bathroom break" in the bush I scratched my leg bloody. Luckily I always carried two things, thanks to the smart advice of my friend Roberta, who had lived in Tanzania for a while: moist bathroom wipes and alcoholic hand cleaner.  I used both to clean my wounds as we drove on.  This was a moment where I envied men for being able to relieve themselves in a much less complicated way, especially when there wasn't a single bush to hide behind.  But luckily the locals take natural processes in stride.  After all, only my skin color was different, my "behind" was the same.  I'm not cut from that cloth, but I yielded to my fate.  Couldn't be changed anyway.
Finally, after yet another 30 minutes, we were told we had arrived.  About 20 yards away, there were some blue tarp tents, very close to a white pile of rocks mostly consisting of calcite.  We got out of the car and walked up to the small group of men sitting around a camp fire. It was lunchtime and they were eating ugali with some cooked beans, eaten by hand according to custom.  We got friendly stares, and Moustache chatted with them in the Masai language.  They got up to show us the hole and talked about the green tourmaline.  The town had been sponsored by a local dealer who had brought a generator with a hose to bring air into the mine.  It was about 70 meters long, they said (that's 210 feet), so air was needed at the far end of the shaft.  Their lighting consisted of flashlights fastened around their heads,   not the mining lamps we have.  I was sad I hadn't brought my headband with the reading lamp, they could have obviously used it.  Jochen in turn was sad that he couldn't go into the mine.  He hadn't expected to find anything of interest, and so he wasn't wearing jeans and he had left his hammer at the hotel.  Otherwise he would have climbed down.  I, in turn, was totally satisfied just looking down into the hole and taking some video.


The locals showed us a few pieces of rough they had gotten out of the ground.  It was the first strong green tourmaline found in the area.  Only a few pieces are found at a time, most not facet grade, so it can take weeks to get together a parcel.  If it took that long in the US to get gem grade materials, they would be priceless. I did hear after coming back to the US that some time in later September or early October, a larger pocket of material was found, and it got bought by Steve from New Era gems, who visited Komoro on his fall trip to Arusha.
I ended up buying two tiny but gemmy, facet grade pieces of rough for $10.  After cutting, they'll cost a lot more, and they'll be small, but it's not like I made a big investment.  I just wanted to buy something.  Most material was going into the hands of whoever sponsored the mine anyway I presume, as that individual had paid for it.  It is known that the locals sell some stuff on the side, and while that's not liked, it is generally tolerated.  Illegal mining, as it is called, takes place everywhere, and as I see it, it is needed to support the locals.
Here's a video I made of my trip:

For instance, in Loliondo, the rights to the mines that yield Spessartite (a Mandarin garnet) were acquired by an Arusha woman nicknamed Mama Six-Finger ("Mama" means woman).  "She does have six fingers on one hand," Jochen said, who had met her some years ago.  Initially, mining in Loliondo went well, but after a while, Mama Six-Finger's guards, who were protecting the area from the local Masai who claimed ownership of the land, ended up in a shoot out and some people were killed.  As a result, the government shut down mining, which is why the Loliondo Mandarin Garnets are now so rare.  Mining still takes place but only "illegally," that is, against government mandate.  The Masai bring the gems to town and from there they make their long way to places like my website.
In other, larger and more well known mines, the miners leave pieces in agreed upon places inside the mine. At night, the Masai come in and pick up the pieces, in order to sell them off at the local markets. In the end, however it happens, most of the gems make their way to the same brokers and dealers. It's just that the money is distributed in a different way.


It is difficult for a foreigner to comprehend this system or the ethics of it.  Save it to say that since poverty and corruption are everywhere (and seem to go hand in hand), it is difficult to pass judgment.  Out of all the people who have nothing, who should have food or drink?  The ones who have something in these countries, it is said again and again, did not earn it honestly, because that is just about impossible.  But are you therefore to remain honest and poor?  Posho, the extra money collected by officials and others to speed up custom's processes and the like, does not consist of huge sums by our standards - most would still fall under "gifts" in the USA because it is less than $20.
Anyway, I was in Tanzania to observe and to learn, not to judge.  What I took away from the trip was that matters were considerably more complicated than what meets the eye.  I would have had to spend a lot more time there to get a true sense of culture.  So I came away with a much greater understanding, yet being intensely aware of how much more there is that I don't know.