Written by Joanne Simmons
Filed under
africa, Antelope, arusha, cecile raley designs, Elephant, Gem Hunting, gemstones, Giraffe, Impala Hotel, Lion, Mwajanga, National Park, safari
Previous / Next
Of course, one of my days in Tanzania had to be spent on safari.  Hiring a jeep and driver for the day is expensive: $250 plus gas and park entrance fee, which is $53 for whites and $5 for locals, or rather, for African blacks, since Honorine who is from Rwanda and Doreen who is from Kenya, also just paid $5.  Instead of getting a jeep, we negotiated with a local driver who borrowed a minivan from a friend.  The entrance fee remained the same though. We chose Mwajanga National Park, about a 2 hr drive from Arusha, a bit closer than the Serengeti which borders Mwajanga to the East.  Mwajanga, aside from housing many different animals, is also located in an interesting area: the part where the African continent is coming apart as a result of plate tectonics.  You can see a huge rift elevating itself on the north side of the park.  The separation line stretches all the way to the Middle East through the Ocean.  South of the rift is a gigantic lake that has formed as a result of the rift.  The lake - over a mile deep by the way - serves as refreshment for the animals the hang out in the park.

Since this was the dry season, I didn't see as much as I would have in December for instance.  There is no winter or summer in Tanzania, incidentally, because it is located too close to the equator, so talk of summer and winter doesn't make much sense.  You have to be further north or further south to intelligently speak of those kinds of season.  This doesn't mean that there are no weather patterns though. The surrounding grasslands are extremely dry in July and August and turn to green from November to about March or April.  That's when you can expect torrential downpours and lots of flooding, in addition to more heat.  The dry season is better travel weather for someone like me because it is much less hot and humid, only maybe 90 degrees during the day.  Arusha, which lies 1500 meters high because it is close to Mount Meru, the second largest Mountain in Africa after Kilimanjaro, is even cooler.  During our stay, it was 50 degrees or so at night and about 80 during the day.  There were no mosquitoes, or hardly any, and it is too high and too dry for the ones that carry malaria or Dengue fever (much to my relief).


We spent about 3 hours driving through Mwajanga.  I took some really nice videos of elephants coming right up to the car and baboons having fun.  The giraffes were more shy, they remained in the distance.  And of course the antelopes ran away like deer.  But if you drove slowly you could see many of them just 30-40 feet away, staring nervously at our car.  The park consists of a lot of intertwined unpaved roads, with several dozen tourist filled jeep like vehicles on the way (Toyota, mostly, made specifically for safari rides in Africa).  We drove about half way into the park, 20 miles, which took over an hour because the roads were so bad.  The drivers we passed would yell out to us where else to go look for animals - that or radio are a common method of communication.

On one such drive by we got to find out that there were lions in a nearby open area.  This is a rare treat.  Lions do not come very close to human beings, they tend to hang out on their own. Contrary to common belief, we are not of much interest to them food wise (they get better stuff in the park). There are local tribal communities that live right among lions, in fact.  We walk upright and we move slowly, so we don't register as prey animals given their instincts.  To want to eat a human, Jochen said, a lion has to be pretty hungry and pretty old (so he can't run fast enough to catch an antelope).  In short, the chance of getting run over on a busy Manhattan street is considerably higher than getting attacked by a lion in a national park, despite the impression created by the media.
Anyway, we headed toward the lions and parked alongside several other vehicles by the roadside.  I wasn't brave enough to get out of the car, nor is it allowed in the open road.  You can only exit in designated picnic areas.
The lions were hanging out about 300 feet away.  It was a couple, the female had just hunted and killed an animal -  we couldn't see what it was - and they were munching away, then resting lazily in the sun. A coyote was nearby, waiting for them to be done so he could finish up the rest.  The lions seemed content.  I took a lot of photos from the distance but my lens was not strong enough so they are hard to see. My final treat toward the end of the ride were some elephants nibbling the leaves off a tree directly by the roadside.  Elephants have no natural enemies, I am told, so they are extremely relaxed animals.  There was a really big older guy about 2 meters away from my car, curiously eyeing me with one eye while eating.  Even our driver had never seen anything like it, and he had been in the park a few times already.  I got a great video of him.  I left the window rolled up for the most part, just to be sure he wasn't going to stick his long nose into the window to see what was up inside.  Or decide to lean against the car, which would have definitely tumbled us over.  He was at least twice as heavy as we were. 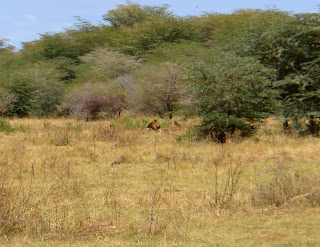 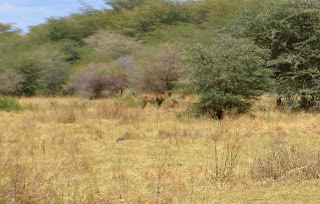 Earlier, we had seen an elephant rubbing his huge behind on a tree to scratch his itch from the fleas.  That reminded Jochen of an experience he had in his 20s: he was driving through the Sahara desert in his Unimoc and had settled somewhere for the night, sleeping in the back of the vehicle.  All of a sudden the vehicle started shaking.  He was terrified, but only briefly, until he saw the small elephant - elephants in that region are much tinier - rubbing himself against the car to scratch his itch.  After the elephant had satisfied himself, Jochen went back to sleep. 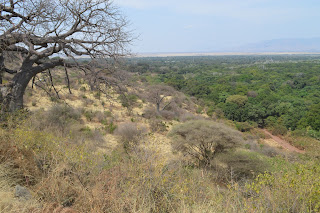 After the two hour ride back and a short shower to rinse off the enormous quantities of dust kicked up by driving on the dirt roads, we had dinner at the Impala Hotel: Indian food. It is interesting to see how different countries interpret certain cuisines.  Indian food in England, for instance, tasted very different from Indian food in the US.  Arusha has a large Indian population, so I was very curious how the food tasted.  I was not disappointed, and neither was my Kenyan friend Doreen: she wanted to try absolutely everything she said.  To save money, Doreen never eats out, and certainly not food like this.  It would have cost her a quarter of her month's salary to pay for the dinner for the four of us, or more.  For me, it was about 1/3 of the price of New York - and that at one of the best restaurants in Arusha.  We had prawn appetizers, dips and different breads, a cauliflower appetizer, and five main dishes. The palak paneer was much richer than I am used to, and the mushrooms were fantastic.  The bread was all freshly baked - you could watch it being done in the open kitchen. I practically rolled out of there.
Stay tuned, the last leg of my trip (blog coming out in a couple of weeks) was a trip to one of the local tourmaline mines!