If you read my blog, you know that I am infatuated with old stuff.  I like old mine colored gems, even though the cutting is often poor, I like antique jewelry, and my own designs often have an antique look.  I love the detail and workmanship of the jewelry work of bygone days.
But I also like bling.  And nothing has more bling than a diamond.  No wonder, then, that vintage diamonds appeal to me the most.  They are also the only diamonds that are truly rare.  Vintage diamonds are a niche market, but lately they have gotten renewed attention, and that has driven up prices.
There are several different vintage diamond cuts.  Let’s look at “Old Mine”, “Old European” and “Old Fancy Cuts.”
Old Miners:  The term “old miner” generally refers to stones cut before the modern brilliant cut was perfected.  Old miners were mostly cut before the 1920s (starting in the 1800s).  The true “Old Mine” cut is cushion shaped, so it is a precursor of the modern cushion cut.  It has a high crown, small table, and a deep pavilion.  The culet is open, meaning it is cut flat and not to a point.  This changes the light reflection (and protects it from chipping).  An old mine cut also has fewer facets.  For that reason, old miners have less brilliance than brilliant cut stones.  But they have a lot of fire, that is, a display of different colors.  Some say that old miners perform best in candle light.
Old European Cuts: These are more roundish and flatter than old miners.  They’re also called “Euros.” This type of cut appeared a bit later, in the mid to late 19th century.  Euros have more facets than old miners, but they also have an open culet.  They are the precursor of the modern brilliant cut, with the same number of facets (58 to be exact).  I also read that both the Euro and the Old Miner can appear lighter than they actually are in color because the open culet lets in more light that reflects around inside the diamond.
Old Fancy Cuts: Like today, vintage diamonds were also cut as marquis, ovals, pear shapes, and trillions.  The way these can be distinguished as old miners is by their facets, which are overall larger, but also shorter and wider than modern cuts.  And the overall proportions are different, i.e. marquis shapes are often “fatter”.  Modern marquis are usually 6x3, 7x3.5 mm etc, so they are twice as wide as they are long.  Old mine marquis might be 6x3.5, and they are not calibrated. 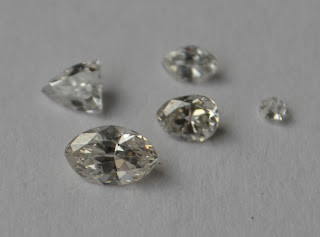 One thing that recommends vintage diamonds to me is that most don’t come from Africa because they were mined before the South African (and other African) mines opened.  Some originate in India, many in Brazil.  Overall it is nearly impossible to tell origin with diamonds though.  To date, as far as I know, there’s no sure fire technology available to tell you where a diamond is from.
You should also know that of course it is possible to cut a modern diamond into a vintage cut.  Some companies actually specialize in perfected vintage cuts: they cut old-mine style but with perfected symmetry and faceting.  True old miners, by contrast, often show some signs of wear, though a good re-polish may remove those, leaving only the a-symmetry as a mark of the old miner.  But of course, even that can be reproduced.  For the most part, though, old miners are just that.  Little wonders of the past, reminding us of the beauty of imperfection, of artistry done by hand, not machine. 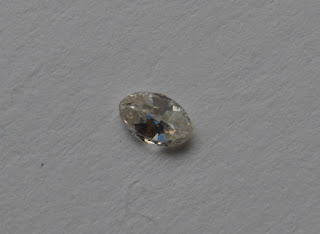