Garnets, to me, are some of the most “disorganized” gems available on the market today.  Their sheer variety, but also their names, can be very confusing to the uninitiated, leaving the connoisseur not far behind.  Here’s an attempt to cut through the confusion.
“Garnet” really refers to a variety of gemstones that are related but not identical in their chemical properties.  In terms of their chemical “species” (if that’s a good name for it), there are Andradite, Almandine, Grossularite, Pyrope, Spessartite, and a couple of others.  Different websites (and books) group the chemical varieties together in different ways.  I.e. Sometimes Grossularite is listed under Andradite, sometimes they’re separate.  Many garnets are actually mixtures of these different chemical compounds (meaning the molecular structure is not exactly one or the other), so what goes with what seems to be more of a matter of how you like to group (and market) your gems.  So let’s sort them by using the names you would most commonly encounter when the gems are marketed to you (in a store, on a website, etc.):
1.      Red: yep, just “red”, I don’t know another name.  Those are usually a mix between pyrope and almandine, or either.  The “Ant Hill” variety is found only in Arizona.  It’s a pretty variety that’s a little more bright red, but like all red garnets, it can appear sooty in evening light and has to be cut well so it’s not blackish.  Any red garnet is easily available on the market and very inexpensive.  The lowest wholesale price I’ve seen is about $1 per carat.
2.      Rhodolite: also a mix between pyrope and almandine, it’s less common, especially in larger sizes (over 10mm).  Rhodolites are any form of pinkish and purplish garnet, and sometimes appear under names such as “cranberry”, “raspberry”, or “rose”, depending on the whim of the gemdealer who sells them.  Rhodolites come from just about anywhere in the world, with Tanzania producing some of the nicest ones.  It’s also readily available in smaller sizes but carat prices are more like $10, wholsale, sometimes more (and on occasion less).
3.      Spessartite: chemically it falls under Andradite, but the name comes from the Spessart forest in Germany, where it was first found.  Nowadays spessartite comes mainly from Tanzania and Nigeria.  It is a brownish orange, with the cleanest and brightest, most orange stones usually termed “Mandarin” garnet.  Spessartite, especially larger pieces, can be quite expensive, and it is almost never as clean as rhodolite and the reds, both of which should be totally without inclusions.  Prices are anywhere from $20 per carat for tiny sizes to $1000 per carat for huge chunks.  Or more.
4.      Tsavorite: a grossular subvariety, which also falls under andradite, tsavorite ranges from yellowish green (which is less expensive) to a dark rich almost emerald green with secondary hues of blue.  It is named after Tsavo national park in Kenya, but the mine is on the border to Tanzania, so the latter mines Tsavorite as well.  Gems over 3 carats are extremely rare, and in recent years Tsavorite production has decreased drastically, so you are going to see an increase in price.  Last year I was getting small stuff starting at $40 per carat, that price is long gone.  Large pieces are a few hundred per carat to a few thousand.
5.      Merelani mint: also a grossular garnet, and really a light colored Tsavorite without any secondary yellow, Merelani’s are named after the Merelani mine in Tanzania, the only place in the world where they are found.  Production is extremely small for this reason, and as of late I’ve hardly seen them on the market at all.  Prices have skyrocketed accordingly, whereas a year or two ago, nobody cared about this minty color.  Prices are all over the place, and since they’re nearly unavailable, it’s hard for me to say anything concrete.
6.      Demantoid: the most famous of the greens, it’s another andradite garnet.  It is a very clean stone with a high refractive index, and usually has an olive color (though more apple green ones have been noted for their extraordinary beauty).  It traditionally came from Russia, but now it is also mined in Africa.  Demantoid is very scarce.  Price per carat: if you pay $100 for tiny sizes, you are lucky.
7.      Mali garnet: this is a mix between grossular and adradite, a very clean stone, medium priced, and comes in yellow, brown and reddish brown, with the most expensive color being a light green.  It is named after Mali, where it is exclusively mined.  Right now it’s not nearly as pricey as Tsavorite and less than Spessartite also, but not as cheap as rhodolite (think between twice and 4x as much).


. 8.      Umba or umbalite garnet: a red or reddish pink garnet named after the Umba valley in Tanzania, where you also find the Umba sapphires.  It’s not too expensive yet, it’s basically a fine quality rhodolite garnet.  But I’ve also seen it cost 2-3 times as much, depending on cut.
9.      Malaia garnet: the name (I looked this up) is Bantu, and the name is usually reserved for any light pinkish, peachy and peachy orange color garnet (sometimes also orange, which makes it confusing because spessartite is also orange), mostly of African origin.  It is mined in Tanzania and Madagascar at present.  Malaia garnet can have various chemical compositions, so I’ve not seen it classified except in a thread on Pricescope, where it was deemed as a mixture between pyrope and Spessartite.  Some Malaia garnet can be expensive, but I think that’s just hype.  The pricing should be more or less like Mali garnet, except for larger stones.  I’d personally say the rosy and peachy colors (imperical colors, or padparadscha colors) are the most unique and interesting.  I’m not sure about prices.  I’d say somewhere between Mali and Spessartite but it really depends on the piece and on the seller.
10.   Hessonite: this garnet is also orange brown like Spessartite, but usually not as bright.  It belongs with the grossular family and is neither particularly beautiful nor expensive.  Lately I haven’t seen it marketed much though.  So perhaps other names for the variety have superseded it.  Small sizes are cheap, like red garnet.
11.   Color change garnet: first of all, color change is observed in almost any variety of garnet: red, orange, pink, green, and blue.  In other words, some rhodolite, some malaia, some umbalites and some pyropes all change color (but tsavorite, spessartite, and demantoid don’t).  If you have a nice garnet of this variety, try looking at it under different lighting conditions, perhaps you see a change that you never noticed before.  The most expensive color changing variety, by far, comes from Tanzania and Madagascar, and it is blue, blueish green, or green in color (though dark green, not like Tsavorite), with changes usually from the blue or blueish green varieties to purplish and pinkish tones, whereas the green ones change to red.  I’ve only seen a red-green changer once, though.  It was cool.  Many of the blue and dark green color changers are dark in color, especially the larger sizes, and they can have grey mask.  Over 1 carat, they are nonetheless very expensive (think Tsavorite for comparison).  But they are largely very clean stones, and when you have a bright blue one, you have a real winner!  Prices can be $100 starting if you are lucky, but anything over a carat is more like a few hundred.  Anything over 2 carats is very rare. 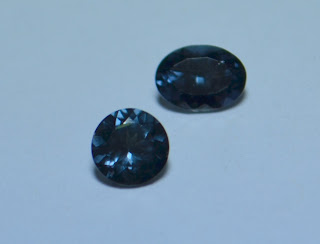 Gemstone availability changes constantly, keep that in mind when you collect.  A simple rule is that larger stones are rarer than small ones, and that you want as clean as stone as you can get for the variety you are looking at.