It is rare that one gets much insight into the actual method by which gemstones arrive at the gem dealer’s booths in New York, unless, that is, one knows buyers who shop direct – “from the mines,” so to speak.  I know two people who do just this: one deals in the crystals that are displayed at mineral shows, the other sells gem quality pieces.  The latter goes through his uncle, who is a gem dealer in Tanzania, the former, Jochen from Jentsch Minerals, is a geologist that has seen the process down to inside the mine.  Jochen, who has a Masters Degree in geology and mining, has spent decades travelling back and forth between Africa and Germany, his home country.  He consults mining operations by writing survey reports, explaining where they should mine and how.  His childhood dream was to cross the Sahara desert, and he saved up for the trip by collecting and selling minerals while he was still in college.  Three months he spent on the road, starting somewhere in North Africa and ending up in the Congo.  It might have been a shorter trip but his vehicle broke down in the Sahara and he had to wait for someone to pass by and give him a ride.  He waited three weeks.  Jochen speaks German, English, French, Spanish, as well as Swahili, the local language Kenya, Tanzania and Mozambique, among others.
There is actually only one Tanzanite mine in the world, located near Mount Kilimanjaro in Tanzania.  It is divided into four parts, named Block A-D (though the individual “mines” also have local names).  The C block is commercial and high-tech, it belongs to a South African Company called Tanzanite One.  It is high security and off limits to any outsider.  The B and D blocks are reserved for small scale local miners that work in groups, staking claims that look small on the surface but that reach hundreds of meters underneath the earth.  There is no regular pay check for miners – they receive only food: rice, dried fish, nothing much else, but they can survive.  They sleep outdoors, on trees (yes) and in simple huts.  All the rough that is found is collected by the stake holder who owns and manages the mine.  In small parcels, it is sold off to dealers, or to others that have the right connections, like Jochen.  The price of each parcel is negotiated between the buyer and the seller – often with the help of a gem broker (who, as opposed to a gem dealer, does not own any gems but helps facilitate a transaction for a fee).  The proceeds are split among the miners.  The hope of any miner is to find something truly valuable.  For most of them, that dream never comes true. 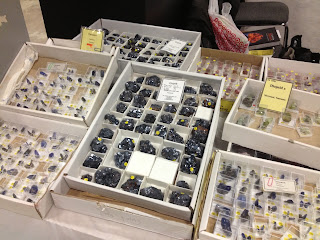 But at least some of the money that is made off Tanzanite makes it back to the local workers this way.  And to the government, of course, which collects a tax on all the material that is exported.  To take rough out of Tanzania, it is packed up into tin boxes which receive a special government seal that indicates the tax is paid.  But there is also a second seal, which is in the hands of the more local authorities.  These must be paid what we’d call a bribe because it’s not official, yet it is understood that without the second seal there is no exporting the goods.  The “bribe” – which I bet in America would just be called a municipal tax (but this is not America), is again split between locals, and it’s another way for some of the money international buyers make off of the goods stays in Tanzania.  It is, perhaps, the only way, and as I see it is only fair, considering the markup Tanzanite enjoys once its cut, graded, and finally ends up in the hands of the American consumer.
And that is how the Tanzanite comes to me – with no middle man – and it provides me with some insight into the process.  What we pay the locals is not fair by our standards, but I know that it means survival to those who climb ladders leading hundreds of meters underground, who get killed by heavy rains and floods or by the occasional underground shootings that take place when lines between stakes are crossed.  Who work in rags and with poor equipment, eat dried fish and rice, not being able to predict life beyond the next corner.