I usually try to stay away from the softer gemstones – after too many experiences of them falling apart on you.  But sphene, which has a hardness of 5.5, is just such a beautiful stone that when J., my gemstone dealer friend who specializes in East African goods got a parcel, I just had to have some.
Sphene is also called “Titanite” because of its high titanium content.  It has an extremely high refractive index and in the sunlight, it looks like it actually has more than one color (this is also called pleochroism).  The prettiest, in my view, are lemon yellow with flashes of green.  The name “sphene” comes from the Greek for “wedge” because that’s how the rough looks before cutting.  You’ve seen it in my sphene slice jewelry.
J.’s material is Madagascan, which is one of the well known locations for sphene at the moment.  When he opened the plastic bag it came in and poured the content out over the table, I almost gasped.  I took some pix for you so you can see what I was facing.  Many stones were more yellowish-orangy, but a good portion had the green flashes I was looking for.  I spent a good hour just playing around with the parcel. 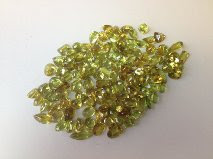 In terms of pricing, picking from a parcel usually gets you a lower per carat price because the material is not yet sorted (it is usually pre-sorted though, into lower and higher grade).  Sometimes, first pick from a new parcel can cost a little more though, because the best stones are still in there.  A parcel that’s been very picked through often gets discounted after the nice stuff is gone, but it’s not always worth looking at it, either.  Some dealers also up the price for “choice” as opposed to just scooping some out for you and weighing it (or trying to sell you the entire parcel).
Individually priced stones are usually marked up, and since J. usually takes out the time to do just that for the shows – weigh each gem, measure it, determine the clarity, and then mark it up more or less depending on his expert judgment, I am always thrilled when I get an email saying a fresh parcel has arrived and I can pick before it’s been priced out.  Then the markup is standardized across the entire shipment, meaning if I pick well I get great materials at a great price.  The labor is mine of course, but I can enjoy playing around while J. makes phone calls, answers emails, or just watches me to see what I will pick.  Sometimes I line up the gems into pairs, and if J. is in the mood, he will individually bag the leftover pairs after I’ve made my choice.  That saves him the time of matching them later, and matched pairs also go at a premium because matching is very time consuming.
Anyway, I picked about 20 carats worth of sphene in the end (10 gems).  I closed my eyes when J. put my parcel on the scale, but it had no effect on the weight, lol.  I did what most gem dealers do, I immediately sold a couple stones at a very low markup just to cover part of my cost (so the cushion pair I bought is gone, but the oval pair is still there).  Then held on to the rest (I bought these in May), and just marveled over them for a while.   I’m still waffling over how I should sell them: individually or in finished jewelry.  Sphene is tricky to set and I don’t want to disappoint a customer.  On the other hand most of my customers seem to prefer to choose their design.  But no way I will bezel set these, and probably I will discourage rings (too bad, because then you can’t see the sparkle).  Maybe I will keep one for myself.  Choices choices…