Written by Joanne Simmons
Filed under
arusha, cecile raley, cecile raley designs, gem buying, gem district, Gems, kilimanscharo, Kinjonga, ruby, Swala Gems, tanzania, tsavorite, zoisite
Previous / Next
We left for the airport at Antanarivo (Tana), Madagascar, in the early morning hours to catch the mid-day flight to Nairobi, Kenya with a connecting flight to Kilimanjaro (Kili), Tanzania.  Travel involved a 3 to 4 hr car ride from Antsirabe to Tana, and then a meeting with the local mining office for export.  An export fee is hashed out based on our purchases.  It seems to be rather fluid and is required but not exorbitant.  When the mining office is paid export without hassle is secured.

The lines at Tana airport were long and slow, we almost missed our plane even though Jochen's platinum card got us a priority check in. Stupid me had also forgotten little nail scissors in my purse. Usually this passes through security no problem, but not here. Long story short, we ran across the tarmac and raced up the steps 3 minutes before the airplane doors closed.

With the plane being 10 minutes late (probably because it was waiting for us) and there only being one hour for us at Nairobi airport to change planes to Kilimanjaro, we faced the same problem a second time: we ended up running from the tarmac into the terminal, down five gates (it's not a big airport by American or European standards), and back out onto the tarmac into the plane that had again been waiting for us. What didn't make it, however, was the luggage!


So upon arrival in Kili, and after all the immigration stuff was finally taken care of (because we were buying gems we needed business visas, which cost $250 cash each), we had to report our luggage as missing in action. "Tomorrow," we were told. They would bring it. The only minor hiccup with this was that my tin box containing my Madagascar gems (and Jochen's box) could not be imported into the country. Otherwise we would pay royalty (import tax) on the estimated price (not the invoice price) and that could get expensive. But if it was sealed and left at customs until our departure it would not count as imported. In short, we had to come back to the airport, a one hour drive, the next day, pick up the luggage, remove the boxes, leave them at customs in their safe, and then go back to Arusha. But we had no choice. And no toothbrushes, or anything else for that matter.


We finally arrived at the hotel at 10:30 pm, famished. The kind cook made us a late dinner, curried chicken. A couple of beers helped us relax and we went to bed immediately after. The hotel, the Arusha "Resort" - my quotation marks - was simple, with barred windows to prevent thieves, a cold stone floor, and looked a bit like a bunker from the outside. But save for the hot and cold water being mixed up, typical I was told, I had no complaints. At $45 a night, it was a bargain compared to the luxury hotels that start at $150 a night. And breakfast - simple eggs, some fruit, coffee and tea, fresh passion fruit juice, white toast and marmalade, was free.

I was hoping to go to the airport the next morning but Jochen had to go to the office to start buying his goods. So after a brief shower and breakfast, we walked the short distance through town to his office in yesterday's clothes.

Having arrived after dark, I didn't get much of an impression of the town. Arusha, once a sleepy nest of a few tens of thousands, has grown to nearly a million since the first finds of Tanzanite in 1969. Tanzanite One, the main mine, is located just a few miles outside of town. After Tanzanite, there was Tsavorite (originally from Kenya but now mainly from Tanzania), Spessartite, and then Spinel. These days, Arusha is one of the wealthiest cities in Africa, it even has a few two lane paved roads and a total of four traffic lights. Jochen told me that when the first traffic light was introduced, it caused more chaos than it solved because nobody understood how it worked. And in another city, I forget which, Jochen said the glass from the light kept being stolen. The red was used to facet fake rubies, the green to facet fake emeralds. A short while later, the idea of a traffic light was abandoned. 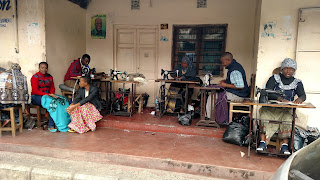 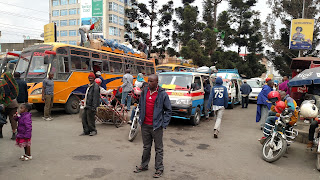 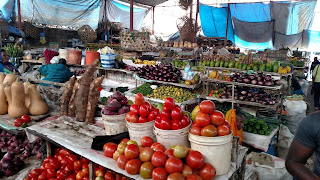 Because of its wealth, there are many more cars in Arusha. And motorcycles galore. And traffic and dust and dirt. From my Western point of view, everything is totally run down, like most of Africa. Lots of people are standing around everywhere. But compared to Madagascar, there were more small shops with more things in them, lots of electronics for instance. And there were houses with glass windows and some high rises (10 stories or so). Like most of the more "fancy" places, our hotel is walled in completely, with a 24 hr guard and a gate. No way in or out unless you are a hotel guest.

The gem trading district is fairly concentrated to a few blocks next to the central market place, probably the wealthier parts of town, though not where the tourists go - they stay in what I'm going to call "oases" - nice hotel complexes with gardens and a pool, restaurants inside, and taxis coming in through the gates every day so that the tourists don/t have to see the rest of Africa.

Here's a brief video of the Gem District in Arusha, and Jochen buying some ruby and zoisite.

Like in Madagascar, I was one of very few white people and I stuck out like a sore thumb. But I had Kinjonga with me. Jochen is called 'Kinjonga' ('salamander' in Tanzanian), because he likes them so much and used to keep them as pets, much to the chagrin of the locals, who believe that Kinjongas are bad luck. Everyone knows Kinjonga (this one, not the salamander) here. He speaks the language (Swahili) reasonably well, he hangs with the locals, eats where they eat, and he brings money to the brokers.

Speaking of money, I was told that despite the run down appearance, millions of dollars swap hands here every day. I believe it. Cash by the way, just like in Madagascar. Just more of it. One of the gem dealers here, one of the wealthiest traders we met, a white man born and raised in Africa with whom Jochen had been doing business for years, said to me he didn't believe in credit cards. He has a safe full of hard cash. Another person I know, a California gem dealer, comes here with over $100,000 cash in his pockets. When you leave the states, you can declare the money, and then declare it again when you come back. That works fine. Unless you get robbed, then it doesn't work at all. 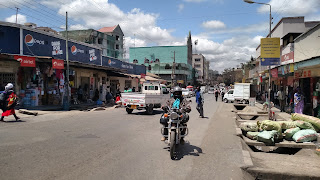 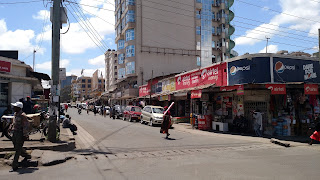 Incidentally, the reason I am being circumspect about names is that security is a big issue in Africa in general, and in particular in areas where there's money. Hard cash money that is. From the outside, most offices look like nothing, but indoors, there are tons of security cameras, and in some cases, armed guards with rifles and other weapons. There are gates everywhere. With private homes, it is not very different. And the concerns are real. John Saul, the father of Mark Saul of Swala Gems, and after whom the famous ruby mines are named, was murdered by locals as little as five years ago.

Anyway, when we arrived at the office, a dingy place that Jochen rents from a local dealer, there was already a crowd of people waiting for us. Moustache, our local helper and broker here, had made calls to announce Kinjonga's arrival. And of course his walking down the street to his office did the rest. His arrival was officially public. We had to wait a while for electricity because the building doesn't have any but there's a generator that could be turned on. Then an extra desk was brought in for me, just as dilapidated as Jochen's.

One difference between here and Madagascar that I noticed right away was that almost all the brokers here were men. I was unusual in several ways: white, tall, and in the gem trade. Only maybe 5% of the brokers here are women, and I'm fairly sure none are women of means. Business was also a bit more aggressive. The door had to be locked after each person came in because otherwise we would be completely hemmed in.

I was shown only total junk at first. Worse than in Madagascar. Glass, broken stuff, amethyst, citrine, small parcels or just individual pieces. Utter garbage. "Taka taka," they say here. Good, I thought, I already spent a lot of money. I kept saying, truthfully, that I didn't have my loupe, or my scale, or tweezers (or underwear, shoes, and everything else). I really wanted to go to the airport...

At around 3, the crowd started to wind down. "Thank God," I thought, because I was wiped out. We took the cab back to the airport (60 minutes). Luckily our stuff was there. My large suitcase was missing a wheel. Ok - at least it was there and complete. Also we had to sort things out with customs and our boxes (30 minutes) and back during "rush hour" (75 minutes). Traffic here is really bad during rush hour. More roads and lights would help, but alas, that requires tax money. And with 70% unemployment that is not easy to get.

Back at the hotel, I finally got to brush my teeth. What a wonderful feeling. The white wine we had for dinner wasn't bad at all, the half bottle of whiskey that was in my suitcase had survived, and a small sip of that and some Madagascan chocolate later, I was out like a light.