Written by Yvonne Raley
Filed under
Antanarivo, antsirabe, apatite, aquamarine, Broker, cecile raley designs, gemstones, Grandidiarite, iPhone, jentsch mineralien, madagascar, malgasy, moonstone, old phones, ruby, Yvonne Raley, zircon
Previous / Next
After I had been in Madagascar for four days, the brokers started to get to know my taste in gems, called their vendors in return and produced nicer pieces for me.  You see the broker is only the middle man (or woman in this case).  Some brokers know a lot, some don't.  But they are told to make a high price and then see.  If you come back with reasonable offers (not trying to rip them off but also recognizing when the offer is too high), they get a sense of who you are.  How much you buy tells them how serious you are as well, and what you reject tells them what you don't like.  My friend Jochen gets stuff saved for him for when he comes because the sellers know his taste.

Also, in the beginning, you are shown a lot of old inventory that nobody wants so the broker can see if they can finally get rid of it.  Then only if you don't want those things are you shown better stuff.  Also you need to expect to be shown the same pieces by different brokers on different days, when the gem owners try another broker to push the merchandise again.  So it helps if you have a good memory.
In the morning, I saw a gorgeous 4 ct pink cushion tourmaline but the price was "American Standard." - I could have bought it in NY for that amount and I said as much.  I said I would decide on the last day but by the last day I had run out of money so the point was moot.  There is no way to get money in Madagascar. There are hardly any banks or bank machines, and those that do exist do not give you more than maybe $100 at a really bad exchange rate, and that's if they spit out anything because most do not have agreements with American banks.  The credit card system is virtually unknown in Madagascar.  Our hotel didn't take credit cards, neither did our restaurant.  Nobody even steals credit cards because they are totally useless.  So there is just Western Union, and they pay out in local currency.  That means you have to know how much you need, or you have to exchange it back at a really bad rate.  Transfers to a local bank account take a week and that's if someone has an account in the first place.  Irene, our broker, didn't have one, and neither did anyone else we knew.  So if your dollars are gone, that's that.  The good thing about that is that you can't really get trigger happy and pull your credit card, with the corresponding regret to follow.  You have to plan for the week, put some things off, wait to see more, buy a little here and there, and hope you have enough when something really good comes along.


My dollars went quickly.  I was shown some sapphires that were pretty but not what I was looking for - a cushion that was over four carats but had yellow in it, which makes it hard to sell,  I made the mistake of making a real lowball offer.  Offers are good all day, and the brokers decided to wait all day to consider the offer.  At sundown, when I had long forgotten about making an offer, they came back and accepted.  So the deal was done.  It turned out the two men had come all the way from Tana to show me stuff (that's the capitol, 3-5 hours drive depending on the roads and means of transportation - most likely these guys had taken one of the local overcrowded buses that stop everywhere someone waves them down).  I was surprised that word about us had gotten around this far.
When I got around to paying the guys, I realized that I had run out of local currency so the two men had to stay overnight to wait.  Having to wait is not uncommon, and the Malagasy are patient.  They wait for their money for days if needed - unemployment is so high that most people don't have much to do but wait.  The only problem we faced was the two men did't even have money for a hotel, so Irene had to give them a small advance for food and shelter until I could pay them the next morning when my money would be there.
That day, I think I looked at gems and dealt with brokers for four hrs straight until we made a mad dash out for lunch, and then I looked at gems for three hours more.  The same women came back again and again, sometimes with the same stuff, mixed in with a new piece, sometimes all new pieces.  It got very tiring saying no so often, and I made a few purchases of material I don't need just to be nice.  I got a lot of apatite, tourmaline slices, some grandidierite, color change garnet, chrysoberyl, green zircon, demantoid, morganite, yellow beryl, danburite, moonstone, aqua and more.
Here's a little video of me shopping for gems.

On my last day in Antsirabe, I was invited to Irene's house for lunch.  I had mentioned to them that I had wanted to see a house from the inside, so she cooked for us.  Or rather, her cousin cooked for us.  Since there was only one car in the (extended) family, and Irene was with us, therefore with the car, she couldn't also go shopping or cook.  Veggies and meat have to be bought and made and eaten the same day. The only fridge was at her sister's house, a 10 minute walk down the road. 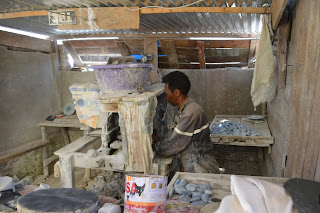 The food was fresh, made with the vegetables in season at the time.  I should point out that the Malagasy would probably laugh at us for eating "local" and buying at the "farmer's market".  Hardly any food is imported into Madagascar in the first place, so if it doesn't grow there, they haven't had it.  And there aren't supermarkets (there's one, that's it) so of course one would buy at the market.
Our lunch consisted of tomato salad, cucumber salad, carrot salad, rice, pork shoulder chops and pork sausage.  Everything was absolutely delicious by the way.  And probably a holiday meal for them.  The kids were really excited, I could tell right away. I would have felt guilty that Irene was putting out for such a great meal, but I knew Irene  did well on the commissions of the sales, and so I think she was happy to share on her end.  I loved Irene at first sight, she was pretty, smart, generous, and one of the kindest people I have ever met.

Irene's house was made of brick and had two stories, like most of the houses there.  The living room was downstairs, and it had a sort of cooking area on the other side (a small room from what I could see).  The family had running water and electricity but no shower or bathroom.  The "facilities" are outside, and Irene and her daughter Maria would shower at our hotel because they loved the hot water there, and the fact that the shower was indoors. Upstairs is an eating area, separated from the bed with a curtain.  I noticed there was little to no "storage room."  But who needs that when there's nothing to store - there just aren't many possessions.
Irene did have a lot of shoes, and when I remarked on that she said they are always bought them used and when you get a good price, you buy more.  To be honest, I saw not a single store that had anything new there - clothes would arrive in big piles and be offered out at the local markets.  There were little huts with things in them but just a few things here and there.  There was nothing where you would go "inside" and look around.
Now, there was one supermarket, a Shoprite, which is a South African company here.  I asked to go to inside and see what they have.  The store is like a slightly larger 7/11, with a pretty good selection, mostly imported products from Europe.  Outside there are armed guards to keep out the hungry.  Inside there are guards in every aisle.  Inside there were a few white people but locals had to ask to go in. I hardly saw any white people in Madagascar anyway so this was by far the largest concentration.
There are a few older French here and there who are left over from the colonial days which ended in 1960 (France annexed Madagascar in 1896).  The wealthy people, the few that there are, live in houses that are surrounded by gates that are hard to break into.  Even Irene, who is far from rich, had to build a brick wall around her property because the chickens would always get stolen at night. 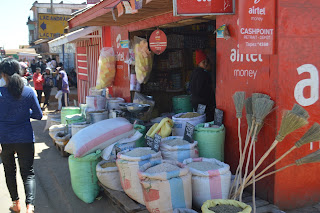 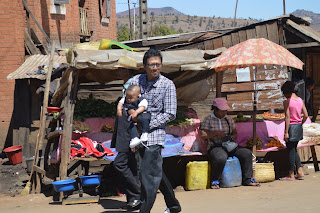 I bought some croissants at the store for the travel ahead (we had to get up at 6 a.m. when everything was still closed).  Two little boys flanked me when I walked back to the car.  Please, a piece of bread, one of them said.  Jochen wondered the next morning how so many got eaten.... I managed to save only two.

This brings me to a final issue: helping, and giving.  Of course I wanted to give everything I owned away before we left.  Jochen cautioned me.  It's a bottomless pit, he said.  You need to choose whom you help, and it is best if you help by boosting the economy - paying for goods and services, not just freebies.  We brought chocolate, small items like little zipper bags useful for storing gems, I left all the gem jars there which was much appreciated. Next time I will bring pens too, because those are important and they were regarded with significantly more respect here than they are here at home.  The best thing, however, is to pay a fair price and bring business to the country by purchasing goods like gems or rough or crystals.  Some of the larger gem dealers that reside here have also built roads and improved the infrastructure.  Everyone can profit from that.
We did make some larger gifts.  Jochen told me before we came here that electronics were much needed and very expensive (in fact, brand name phones do not seem to get exported to Madagascar). My mom donated two old flip phones, I took my old iPhone and that of my friend Roberta.  Phones are crucial because they are really the only means of long distance communication.  Cars cost too much, even buses are expensive so people walk.  Without phones we could not have seen so many nice gems because people needed to be called all day.  Computers are rare but phones can be used for internet and for texting.  Everyone uses sim cards that can be recharged, so you can buy a little internet here and there, when they have extra.
So Roberta's iPhone stayed with Irene, I gave mine to Gael, our driver just when we got to the airport.  I sort of snuck it over to him with a little paper that had my passcode on it (I wiped the phone clean before I left of course).  Gael, 27, whip smart, cute, and also incredibly generous, kissed my hand to show me his gratitude. He was so happy I almost cried.  I will cherish that moment forever.
I just wish I'd had more phones...
If anyone would like to donate an old phone, or a gaming console, or another electronic item that can be used, please contact me.  Jochen is going back in December (I wish I could go) and he can take things.  It is best not to ship anything, I'm told it just gets "lost" in the mail.