Written by Joanne Simmons
Previous / Next
There is so much talk about rare, or "rare" gems these days.  All of us sellers - myself included - use the term a lot, and I imagine it must be hard for consumers to know what to believe.  And of course, each story is different. Not all gems are rare because there aren't any, however contradictory that sounds.
It is hard to sketch a comprehensive picture of the very complicated gem and gem supply world but what I can do is provide a few examples in the form of anecdotes, so here goes:
1. Red Beryl: the red variety of emerald (bixbite) has so far been found only in one location of the world: the Wah Wah mountains in Utah.  I spoke with the owner of the land in Tucson.  There is still red beryl in the ground.  But the surface area has been mined and further mining will require more heavy duty equipment.  This is costly, and given that bixbite already costs thousands of dollars per carat, there is a question of whether or not the market can bear the additional cost.  So mining has stopped for the time being. 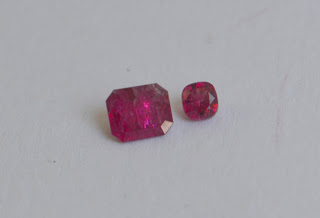 2. Mahenge Spinel: again, while spinel is found in many places, the town of Mahenge that produced this color gem is only a small region in Tanzania.  Initially large pockets of the material was found, to the tune of blocks the size of 50kg.  The spinel crystals had concentrated in larger pockets just a little under the surface.  Now mining has to go deeper and the yield is smaller in the lower regions of the ground.  Geological estimates are that there is not much more to be found.  Mining is still going on but much reduced - my friend Jochen Hintze from Jentsch Mineralien was there last summer.  The rough goes mainly to a few larger buyers with special agreements with the locals.
3. Loliondo Mandarin Garnet: here the situation is different.  Currently the ongoing mining is illegal.  The area belongs to a tribal group called the "Masai" and the Masai don't want anyone to invade their land.  There was some local unrest (people killed) and as a result, the government has forbidden any mining in the area.  Some material gets out but it is not sold as having a particular origin.  It just turns up on the markets in Aruja Tanzania.  Also there is still a bit of older stock people have available because orange is not a color that sells very well.


4. Paraiba Tourmaline: stricly speaking, the only gem that should be called "Paraiba" is a tourmaline that originates from the town of Paraiba in Brazil.  Similarly colored material from other locations can be called "copper bearing" or paraiba color.  The mining area in Brazil - also fairly small - stopped producing larger quantity over a decade ago.  For a while, production was good so there is a fair bit of material here and there, but smart sellers hold on to it and release it little by little.  And prices just keep going up.  The mines produce only small and not very clean melee.  I've also now seen paraiba that is in the host rock (just bits of blue and green mixed with grey) sold on the market.  Also not cheap.
5. Hauyne, or Hauynite: hauyne is mined only in one small area in the Eiffel, Germany.  It is a bi-product of some other type of mining going on there.  The material is still available but due to a mining accident the owner of the property does not permit any mining of hauynite, so all that's left is what's on the market now.  Naturally this could change.  But still, if only one small area produces the mineral, it will never be cheap.  This is according to the German company that sells the material.
6. Cobalt Spinel: the true neon blue cobalt color comes only from one rice field in Vietnam, and a couple of very nearby locations, less than a mile apart.  The rough is so heavily included that the yield is less than 2%, according to Dudley Blauwet from Dudley Blauwet gems.  By comparison, a minimum expected yield of a piece of rough should be 20%.  So that means that instead of maybe $700/ct, cobalt spinel goes for $7000/ct.  Cobalt spinel, out of all the gems listed here, is the rarest.  (After that, bixbite).
So from this you can form a sort of vague picture of the situation.  Most rare stones are found in one location only, and when something happens in that location, then the supply gets choked off.  That something could be local unrest, an accident, lack of mining supplies etc.  Or it could be that the cost of mining does not justify the effort to produce more.  People may want cobalt spinel or bixbite, but they don't want to pay 10K for a dirty morsel of something or other.