Written by Joanne Simmons
Filed under
afghanistan, blue, Brazilian Paraibas Tourmaline, cabochon, cecile raley designs, diamond, faceted, gemstone, green, melee, mozambique, namibia, Neon Green, windex
Previous / Next
This blog entry has been a long time coming - I should have written it over a year ago, when I first started buying Paraibas on my inaugural visit in Tucson.

I have seen and admired Paraiba tourmalines ever since I got into the gem business in 2009.  At that point, I knew little about buying and grading gems, but I was already attracted by their neon glow.  I bought one single piece to make a tie bar for my best friend in Germany - I think I paid only about $100/ct to a group of Brazilian guys at a New York Gem show.
Paraiba tourmaline is named after its location, Paraiba, a small town in Northern Brazil.  While tourmaline has been known as a gemstone variety for hundreds of years, this particular vibrant neon variety was only discovered in 1989.  The mine yielded Paraibas for five years, then production stopped and the mines closed.
What makes Paraiba tourmaline so attractive is its strong blue to turquoise to green and also purple color, caused by the trace mineral copper (I've actually never seen a faceted purple one, not to my knowledge anyway, because I may not have identified it as Paraiba).  Hence the term 'copper bearing'.  Copper bearing tourmalines have since been found in Nigeria, Afghanistan and Mozambique.  But their color is not quite as intense (with Mozambique being the closest).  Often, these other copper bearing tourmalines are also termed "Paraiba" though this is technically false.  "Paraiba color tourmaline" would be more apt.  So when buying Paraibas, it is always worth asking where the gem is from.  Some labs, notably, AGL, can also identify the origin of these tourmalines, though usually pieces larger than 3mm are needed for an origin analysis.  When buying a Paraiba, you should request that the origin is written on the invoice or that it is on the back of the box.  I always have that done.  Also consider working with someone who has a good reputation and if you can, who is a member of the AGTA.  I exclusively buy Paraibas that way.
The single most important factor in pricing Paraiba tourmalines is their color.  The more blue, and the more vibrant, the more expensive they are.  So a vibrant green is less expensive than a vibrant windex blue, with a vibrant turqoise being in the middle.  Even more opaque blue Paraibas can cost more than much cleaner green ones - with much discretion being up to the seller of course.

The photo below shows you four different color grades of Paraiba.  The left two gems are copper bearing but from another location, they show, by comparison at least, a lot more extinction, despite their beautiful color.  The most vibrant gem is the small oval, which also had the highest price tag. The large oval should have cost more because it is also very blue, but it didn't - go figure.  The cheapest was the green pear shape, after that the emerald shape on the right.
Clarity is next in the ranking, though for tourmaline the standards on clarity are pretty low.  Even emeralds are ranked by more stringent standards.

Paraiba tourmaline melee cost approximately 2x as much as diamonds, sometimes 3x as much, in the wholesale market.  Hence the high price tag you see on my blog.  Setting, meanwhile, of Paraiba melee, is difficult.  Pierre, my setter, says it's like setting soap. He's very good and still they crack often.  Softer metal are needed because the way gems are held down is by pushing metal over the gem with sharp tools.  A good eye and steady hands are also needed.  The fact that a lot of Paraiba are included is part of the trouble, inclusions make a gem more brittle and less able to withstand pressure. 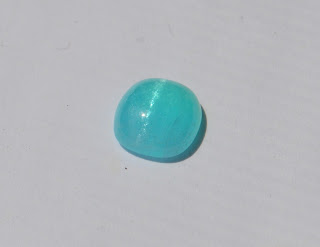 In terms of Paraiba tourmaline care, avoid ultrasonic if you can.  Some ultrasonic machines contain chemicals that are like acid in their solution, other "shake" so hard that they shatter the gem from within.  So if need be, just a very short bath in ultrasonic is best, and you should always disclose that the gem is a valuable Paraiba.  Steam should be applied from further away - it is very hot (by definition) and high pressure. 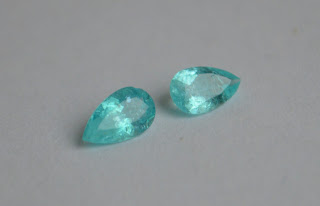 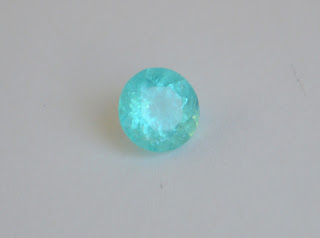 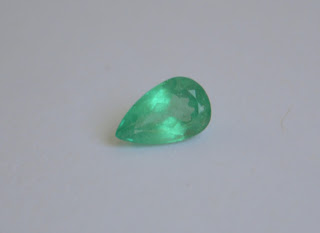 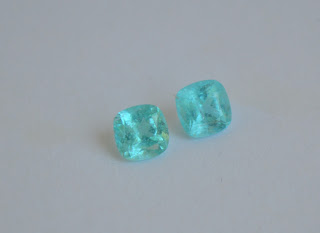 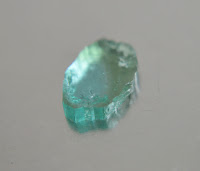 And what about availability of the gem, now that the mines are closed?  Well, I do see Paraiba available with many high end dealers in New York (maybe 25% of them).  But there are few pieces, fewer every year, and prices appear to be unlimited toward the top.  Just last week I saw two pieces that were over 100K.  Pretty they were.  One was mostly big - a high domed cab with ridiculous color.  The other was a several carat windex blue faceted oval.  Maybe I can sneak some shots for you in Vegas in early June.


Here are some Paraiba Tourmaline Designs I've made in the last 2-3 months: 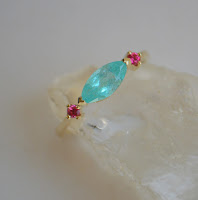 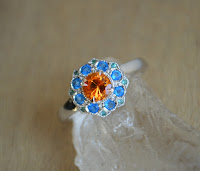