Menu
Cart 0
I’d heard the term many times, but couldn’t make much of it initially.  I looked it up online, but the only reference I found was to diamonds, where the term was used to describe a predecessor to the brilliant cut, dating back to the 1800s.  An old mine diamond is deeper, it has a smaller table and fewer facets, less brilliance but a nice warm glow in candle-light.  I have a few small ones – a fact that had escaped me until someone pointed it out – apparently they are worth more than regular diamonds, but true to form, I have sold most of them for regular price.  Diamonds just aren’t my specialty…
When I google “old mine” together with “colored gem,””gemstone,” or some particular gemstone name, the only thing that comes up, paradoxically, are my own listings.  “Circular reference,” we call that in philosophy.  But on the street, the term is loosely used to describe gems from earlier – and better – mining days (up to 40 or 50 years ago, let’s say).  All the emeralds and rubies I get from D. are old miners, many of the sapphires are, and some of the pink tourmalines as well.


Whether or not an old mine gem is better depends – you guessed it – on the particular gem.  But in many cases – most certainly in the case of Burma rubies and sapphires, Kashmir sapphires, and largely in the case of Columbian emeralds and pink Tourmalines, old mines are better in clarity and color.  The stuff that comes out of the mines in Mogok (formerly Burma) nowadays has to be treated to be marketable.  Many recently mined Sri Lankan (Ceylon) sapphires are still very beautiful, but there, too, the majority is heat treated to melt the inclusions deepen the color (many Ceylons are too light for popular taste).
In some cases, certain hues of color are simply no longer found in the mines.  Take pink tourmaline, for instance.  In the picture below, the two pear shapes and the trilliant cut are old mine.  When you compare them to the oval in the front, you can see the difference.  There are more rose tones in the old miners, the color is softer and velvety.  In the picture that I took of just the pear shapes, this is more obvious.  And if I just look at them sitting on my desk, the color of the old miners just pops out more. 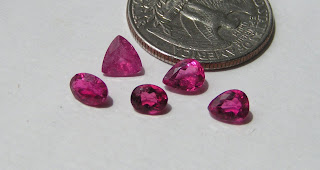 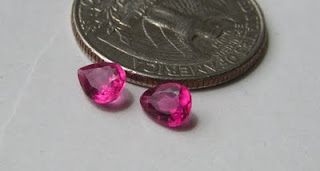 The Kashmir mines (or its neighborhood) also still produce sapphires, but none have the beauty of the original material that came out of the mines in the 1880s.

There are drawbacks to working with old miners, however.  Often, their cut is bulky and heavy in the back, and the gem has less brilliance.  Modern settings often don’t fit these gems, and the setter, trying to make a square peg fit into a round hole, may either break the gem (common with emeralds) or the setting (I’ve seen that with sapphires a couple of times).  In some bezels, the gem sticks out so they can’t be used at all; and the hammer setting can burst the stone from inside.  With silver, which is much weaker than gold, the prongs can break if the setting is hollowed out to fit the gem.  (This is one reason why it is worth it to invest the extra $20-30 for a gold prong setting, especially in rings.)

To me, however, the headache is worth it.  Old miners don’t always cost what they should, given their beauty, because the commercial market has little use for them.  They are rarely treated (the emeralds can still be oiled, however), and they make each piece of jewelry I create one of a kind!

What’s up with all these “new” Emeralds: Emerald Origins Revisited
Mar 14, 2019

Emeralds Revisited – New Arrivals, New Origins and A Word about Treatment
May 24, 2018