Menu
Cart 0
Sapphires seem to have disappeared from the face of the earth.  Literally – because we can’t get very far below it.  This is true of Ceylon in particular, and Burma is pretty much long gone.  African material you can get, Thai also, but not Ceylon.  The good stuff goes at exorbitant prices, and unheated stones have almost vanished.  Meanwhile, I have a small waiting list of people who are interested in one of these non-existent gems.

For months now, I’ve been waiting for Mohammed – I only know his first name – to come back from Sri Lanka.  He’s the guy from whom I’ve got my last unheated parcel this past summer.  It sold out within a month.  Presumably, one day when he has enough material to sell, he will just turn up on the street, and I’ll know the same day because someone’s bound to call me.  Last time I happened to be there the day he arrived, and I got first pick at a good price because Mohammed still had Jetlag (and I had cash).

But in the meantime, I have to look elsewhere.  Here’s one story of minor contortions.  My friend Anya, whose research skills in all things sapphire (and Russian literature) are unparalleled, dug up a seller somewhere in England who had a trillion cut, maybe Burma, maybe Ceylon, low heat only, 1 carat, very good price.  She bought it.  (Yes, there was return policy!)  And the stone, when it arrived, looked legit.  And stunningly beautiful.  So I wanted one, too, and contacted the guy.  He had one more, he said.  It came from a parcel of uncut rough that he had dug up in Thailand some years before, and had cut only recently.  The parcel itself was of mixed origin, no pedigree (meaning no further info was available).  That’s the sort of thing you only buy when you know what you’re doing, or when it’s dirt cheap.

Anyway, this stone was a cushion, 1.07 ct, nice and clean he said.  The picture he sent was fuzzy, but the price was good.  I figured, what the hell, accepted the paypal invoice – which my email system flagged as a potential risk, haha – and got my stone about 10 days later.  It was so beautiful I almost couldn’t believe it was real.  So before I even showed it around on the street, I took it to the lab.  Just in case I was had, I didn’t want to have to admit that to any of my friends.

But the stone was good.  Everyone in the lab admired it.  Low heat only, just like the seller said, possibly just from the cutting wheel, which is unavoidable.  It might be Burma, if not then Ceylon.  Because that is, very broadly speaking, the same region (before the plates moved and all that).  How is origin judged?  Unless you go to GIA and pay an arm and a leg, you don’t get an origin on your gem card.  It’s an estimate based on color, nature of the inclusions, and the presence of zoning.  This is not an exact science, except that you can rule certain things out.

The lab guys also gave me the current estimated retail value, which is a list average based on overall quality (he decided it was “fine”, but shied away from “extra fine”), color (blue, not purple or pink for instance), size (over 1 carat but under 2), and origin (Ceylon and Burma have their own lists, everything else gets lumped together).  $1900!  Whew.  The list they use, called “The Gem Guide,” is technically a wholesale list, it represents the national average of loose stones of that kind sold in the past year or so; for retail you are allowed to add up to 30% to the price on the list.  And if you’re a jewelry store, or you’re Tiffany’s, you can do whatever you want in terms of overcharging the customer.

Armed with my card, I then showed the stone to two gem dealers I am friends with.  One always has an opinion: heat only from the wheel (which means no heat), Ceylon, not Burma, but an amazing stone.  Street price is about $1000.  The other dealer is always cautious: more likely Ceylon because there are so few Burma, no view on heat.  No view on pricing, because it depends on whether or not you are in a financial emergency: if you need money immediately then the price goes down drastically.

So then what is the final story of my gem?  For now, only the stone itself “knows”.  Even GIA, when not sure, will simply take a vote on origin.  If 10 guys see the stone, and 7 say it’s Ceylon, then it’s Ceylon.

Right now my baby is with a guy who has a $50,000 machine which can actually determine origin with accuracy.  I don’t know what it does exactly, but it sounds cool (and when I do find out, I’ll let you know).  I’m anxiously waiting for the person to get back in touch with me…. 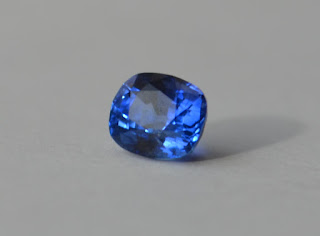 What’s up with all these “new” Emeralds: Emerald Origins Revisited
Mar 14, 2019

Emeralds Revisited – New Arrivals, New Origins and A Word about Treatment
May 24, 2018