Written by Yvonne Raley
Previous / Next
It happens; it can even be unintentional.  You buy some alex, you and the seller think it’s real, and then it turns out to be lab created.  Alexandrite is one of the most imitated gemstones on the market today, and fakes have been around for a long time.  The lab guys I use hear it all the time: “But this was my grandmother’s, it can’t be fake.”  One of my colleagues had a ring just like that, with a huge stone, that she thought was the real deal from Russia – and it even came from Russia some 70 years ago, believe it or not.  But it was just a poor replica – even I suspected it immediately.


But the more recent fakes are much more difficult to tell.  This past month, I was at the lab twice with an alex, and twice the stone turned out lab created.  One was a customer’s stone, the other was (almost) mine.  Here are both stories.  My customer bought her alex (several of them) at an Ebay store that claimed to have real Russian alex, and at a good price.  I didn’t know at first that’s where she got them, and didn’t suspect anything when I made her earrings.  The color change was nice, the stones not perfect, and even a couple of dealers that eyed the stones said they seemed ok.  But then she lost an earring and bought another set.  This time the color change was sort of weird (more purplish and more complete) so I showed the stone around.  Two dealers shared my suspicion so I went to GAL.  The stone turned out to be lab alex: real alex material but grown from alex crystal in the laboratory.   So the refractive index test showed it to be alexandrite, but the inclusions looked too regular to be natural under the microscope.  (Some fake alex is actually corundum, lab grown sapphire, and the refractive index test will show that.)
Here’s the second story: I was offered a super clean cushion alex for a low price on the street, from one of the dealers I know but don’t normally use for that kind of thing (she’s not very knowledgeable).  The color change was weak.  I said I’d buy it subject to lab report.  I was allowed to take the stone out on memo.  Again, the refractive index test checked.  Then the lab guy showed it to another lab guy and both conferred for a while.  The stone got turned this way and that under the microscope.  They verdict: 90% certain that it was lab grown.  I returned the stone.  The dealer was upset, and requested a lab report from her supplier in turn.  This time from GIA.  Fake.  So she, too, returned the goods.


So how can you tell?  The bad fakes are easy, like my colleague’s glass stone.  It was huge, it looked purple all the time, and it was clean.  That’s not a real stone.  But today’s fakes are not like that, they look pretty much exactly like alex.  So what to do?  One rule for alex is this: if the price is too good to be true, then it isn’t real.  If it’s cheap, and looks wonderful, forget it.  Alex often looks murky, and the ones with brilliance have low color change.  Secondly, if someone says it’s Russian, they don’t know what they’re talking about.  Those are gone.  Except for a tad bit of private stock here and there, or a few pieces at a reputable gemstone dealer’s, there’s no more.  Precious Pebbles, the supplier I use, has a few pieces.  And they have the largest alex collection I’ve ever seen.  Plus, it’s actually very hard to tell origin on an alex (like most stones).  The Brazilian ones and the Russian ones look totally alike, the Indian ones are a little lighter in color, more grassy.
Thirdly, see if you can get a look at the parcel from which it came.  It should be a uneven in terms of brilliance and color; and when you do the color change test (you can use a flash light for that so long as it’s incandescent, not fluorescent), then the parcel should light up very unevenly.  It should not, ever, look like this:

Also the color change is far too strong and too even.

For comparison, here’s my parcel.  There are much much better and more expensive parcels than mine of course, but still, this is much closer to what these are like. 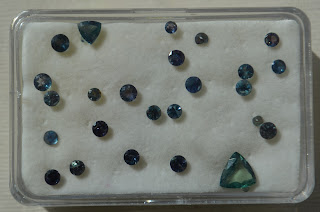 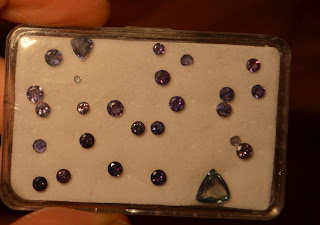