Written by Joanne Simmons
Filed under
AGTA, American Gem Traders Association, jentsch mineralien, Karchener Cave, red spinel, spinel, Tucson gem show
Previous / Next
Wow.  That's the only word I have for my recent Tucson trip.  Tremendous fun, intriguing, and totally overwhelming.  Several of you had said to me beforehand that you live through me vicariously, I just didn't know it was THIS many of you.  The number of convos and facebook comments I got was incredible.  I apologize if I didn't manage to fill all the requests and ship out on time, next year I will take Debbie, that should help.  I worked day and night getting listings out, and each time I sold stuff I went back to the vendors to buy more.  The nice thing for me was that the many sales helped me increase my purchasing budget for future listings and offerings, and I owe all of you who supported my shop during this time my deepest gratitude.

Your feedback also helped me focus one where and what to buy - this is crucial when you are faced with nearly 1000 vendors!

Many of you have been asking what I have brought, and what the highlights were.  This is hard to summarize, but I am going to try.

Red Beryl: finding red (I should really say "pink") "emerald" was a new thing for me, I had never seen it in person, and I didn't know anything about treatments.  There is apparently only one place in the world where it is mined - the Wah Wah Mountains in Utah.  I spoke to the mine owner to get educated (some photos of crystal formations below).  But because the mine owner's gems were 98% treated, I mainly bought from a new contact I had made who specializes in American gems (and who is also on the board of the AGTA).  Robert (Bob) lives on the North Shore of Oahu, loves surfing and only does the Tucson show, otherwise he ships to wholesalers like me, sometimes on memo.  His wife makes jewelry.  My impression of him was that he loves gems, is very knowledgeable, but has an established customer base and is not pushing for a lot of new business (he's in his mid 60's I would guess).  I once lived in Hawaii and my experience was that after some time there, you take life at a more relaxed pace.  I earned my stripes with Bob by purchasing five very expensive pieces of red beryl - I have one left - several pieces of paraiba, three of which are in the lab (the rest is sold), and a little Beniotite.  For some reason that hasn't sold.  I was surprised by that but then that was also a new gem for me. Bob has more pieces (see photo).  And he had some very pretty rhodochrosite which I didn't buy because they are hard to work with.  I may get some at a later point. 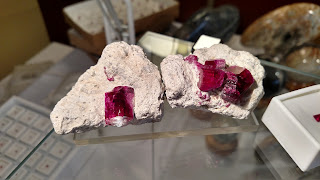 Paraiba: aside from Bob, I found a wholesaler who had the melee I've been selling.  They had told me on the first day that I needed to buy at least one carat (ouch) but I did.  While I was there, another wholesaler was talking to the owner and I overheard that prices were being made for ALL the melee that was left.  That was red alert for me because after scouring two shows and calling around in NY, I found little to none, certainly nothing in that intense color.  So I bought another carat right away.  More ouch.  I listed it immediately because I was pretty worried about my financial exposure.  But it turned out demand exceeded supply.  So I went back three more times.  Overall I bought and pretty much sold 9 carats in about 14 days.  I am nearly sold out at this point.  I have no idea if the other deal went through, I found out at the end of the second day that it was to be conducted in NY, and that until the end of Tucson, I could buy what I wanted.  I have not yet contacted the dealer to see if there's more.  Unless you guys tell me otherwise, I feel like my small market is saturated.

I also found a New York seller with Paraiba, they had a bit more, some cabs too.  I bought what I thought were the nicest pieces, but I will probably make an appointment there in a few weeks, after the dust has settled from this adventure.

Hauyne/Hauynite: that was another lucky buy for me.  The guys with the lavender spinel from Vietnam, all of which is pretty much sold, had a 500 piece parcel.  I first bought some from Dudley who had also cut a lot, sold those, then saw these on day two.  I slept on it and then negotiated for the purchase of half.  By the end of the week I felt confident enough to buy the other half.  He really wanted to sell it all anyway, and there was no picking.  All, half, nothing.  I am still sorting these out, but they were roughly 1.5-1.9mm, with most of them 1.6-1.7.  You'll see listings for them over time.

Spinel: I did see one dealer that had Burmese spinels, gorgeous gorgeous gorgeous bigger pieces.  For - wholesale - more than $7000 a carat for pieces over one carat.  I passed!  I bought quite a bit of Dudley's melee, which you are seeing in the shop.  I got lavender Vietnamese spinel, all sold, one pair a "maybe".  I have to rephotograph more violet colored spinel I listed.  The color is ridiculously off.  It's soo pretty.  I have one more pair in pink that I am debating over myself.  In Cobalt spinel (Luc Yen) I saw very little, some will be listed in a week or two (also out for inspection) and I have a cushion coming to me that I can put out.


Ruby/sapphire: these are all from Dudley.  My only star ruby sold once and almost twice.  I have two more (mildly heated) ruby coming up, some Kenyan sapphires - gorgeous yellow with some blue, Madagascan (teal color), purple, blue, and blueish purple (Ceylon), and a breathtaking larger elongated emerald cut from Rakwana, Sri Lanka.  None are heated.  I'm already out of blue pairs, I'll have to ask for more in a month or two.

What else?  I've been selling down on the Kenyan Tsavorite (so pretty), I have just a few 3.5mm left to list I believe.  Then I just have some oddball stuff left.  I loved the twin star sapphire that sold right away.  That was a total novelty.  I saw some on eBay but none in that quality.

I don't know that I made a lot of new connections this time.  Just the one with Bob (from whom I bought a little bit last year).  But more important to me is to deepen the connections I have.  A lot of it is based upon creating buying power and lending power.  Making purchases, paying right away, not having checks bounce, not returning, not wasting time and fussing, knowing one's stuff.  Gem dealers have low markups and in the wholesale, they have to time for difficult buyers.  This doesn't mean you can't spend time selecting.  You should in fact.  You can show a little of your knowledge by commenting on gems and be honest when you don't know.  The good gem dealers appreciate it. You also never insult merchandise or prices.  You can say you are not interested, you don't have a market, you can't sell it at that price, you don't have that kind of budget.  That's all ok.

Well I think this is enough for today.  I'll leave you with some impressions of my two (half) days off after the show.  I took a trip into the Catalina Mountains, watching the sunset.  And my friend Jochen from Jentsch Mineralien took me to Karchener Caves, one of very few living caves around the world. If you like to know about minerals, then this excursion into geology is up your alley!

My thanks again to Debbie and Karen, who put in extra days to keep the shop afloat, and to all of you who "accompanied" me on this trip!