Written by Yvonne Raley
Filed under
AGTA, cabochon, dudley blauwet, gem show, gjx, Hauynite, jentsch mineralien, las vegas, paraiba, sale, sapphire, spinel, springfield gem and mineral show, tourmaline
Previous / Next
Traveling to gem shows to shop was a new thing for me this year.  I did go to the Springfield Gem and Mineral Show last fall but I exhibited with my jewelry and gems.  Or rather, I pretended to exhibit because I shared the booth with Jochen Hintze from Jentsch Mineralien, and since nobody was interested in my jewelry (wrong audience), I shopped while Jochen watched my inventory.  Other than that, I regularly attend the JA (Jeweler’s Association) shows in , but most of the vendors there are sellers I regularly interact with.  Going to the show just makes it easier to shop.

Given how successful and Vegas were for me - I spent money and you spent money, so that is my definition of success in this case – I plan to make these regular trips.  I have to admit that, as a town, Vegas itself was not very exciting for me.  I don’t gamble, although I found that sitting at a slot machine and putting in a few pennies was the fastest way to free coffee.  There are no coffee machines in any hotel rooms so getting coffee involves going downstairs, in the direction of the casinos.    In my five days there I gambled $23, and I walked away with $17 profit.  This was not a bad start, but still, I don’t see that this is where my future lies!  I am also a big fan of daylight, of which there is none in casinos.  Nor are there any clocks, which, for Germans like me, can be anxiety producing.  Not knowing what time it is, is inherently negative for me.

Food in Vegas was great though, only New York is better (yes, I live near New York, so…).  However, the show was fun and every time I go to an exhibit, I connect with new vendors.  Vegas show prices are not as good as those in Tucson, where you can often find strange deals on stuff you didn’t expect.  But the more serious and solid vendors always offer you the same prices (market forces permitting).  So I was there to shop around, to find stuff for customers, and to solidify ties with my sapphire supplier Dudley, as well as with an opal seller from Germany who has hauynites (and opals, too). 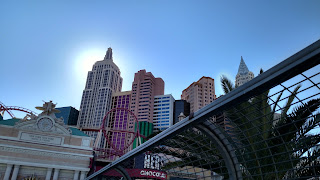 For fun, when I go to Vegas next year I hope to add a day trip to the Grand Canyon, and in Tucson I want to check out some nearby national parks.  When you are born and raised in Europe, where everything is tiny, the vastness of the mountains and canyons of and is unreal.
But let’s get back to business.  Next month, from August 5-9, I will be attending the Springfield Gem and Mineral show again, this time to shop in earnest and without pretending to sell.  There are not many vendors in that carry what I am interested in, but is going to be there, and so will a couple more people I know.  I can, for instance, get more emerald trapiche and cat’s eye (why nobody has bought any cat’s eye is beyond me as that stuff is ultra rare – and, yes, expensive).   Also, my friend Jochen is coming, and so I will have an opportunity to learn more about the current gemstone situation in and .

For those of you who are fans of no heat sapphire and ruby, mainly from but also Africa, please let me know ahead of time if you’d like anything in particular. I can also get heated ones.  I may find some new spinel from and and Cambodian zircon (hopefully those adorable emerald cuts I got).  Don’t hold your breath on Paraibas, I know of no vendors that carry it there unless there is some sort of freak occurrence (like my finding the Paraiba melee in Vegas at this booth where there was absolutely nothing else of interest and just buying the box on a whim before anyone else figured out it was sitting there).  My suppliers sit in NY and they are pretty wiped out – of inventory that is.

In , I can also get a lot of weird cabs (like the purple chalcedony I had), and also bigger cab material.  I don’t normally look for that stuff but I can get it.  And beads.  So keep that in mind as you browse my shop (or other shops).
There will be no other shows for me this year - the next will be Tucson again in February.

P.S. Before I go to , I’ll be having my annual summer sale.  My projected date for that is 7/19, with 15% off the store for 2 weeks.  There will be no second 20% gem sale this year as I plan for that to be an annual event only, tied to my Tucson trip because that’s when I need to raise funds and turn over inventory the fastest, so 15% will be the largest discount offered.