Written by Yvonne Raley
Previous / Next
The gems I offer on Etsy do run the gamut: some have amazing cutting that brings out the absolute best of the gem, others are look more like someone was still practicing on them.  Wouldn’t I be better off having those recut?
There are pros and cons to this question.  To me, there are three important factors to consider when asking myself if I should recut a gem: price, outcome, and what type of gem I'm recutting.
1.      Price: small melee size gems can be re-cut by machine, and that’s how it’s done nowadays.  That’s relatively cheap but of course the quality of the individual gems is not considered – or which way to cut it.  When I buy old material that has seen better days I occasionally have this done, but only if I think I can’t reuse the material as is.
Re-cutting a larger gem, by contrast, takes time, expertise, and cash.  A good average time frame for a re-cut is one hour.  Prices vary, in NY I pay wholesale, which is about $50, but I have to tell the cutter exactly what I want, and many cheaper cutters are not that good, so a re-cut doesn’t always improve the stone.  Also, stones can break during cutting, especially the softer ones.  Retail pricing for re-cutting is about $100-150, or more.  When I have gems re-cut I usually send them through a gem dealer friend to his cutting factory overseas (India or Tanzania).  I pay $3 per carat, give or take, but it can take months to get the gems back and I can't specify any shape.
Also: diamond prices are different.  Diamond and colored stone cutting are not the same in terms of equipment and training, so the two trades are separate, and diamond cutters charge more.
2.      Outcome: re-cutting a gem means weight loss.  If it just has a scratch and I need a facet fixed, it’s maybe a few points (and costs only a few dollars).  If I have a nearly unusable pebble, it might lose half.  The average weight loss for facet rough is 70-80%.  Also, you can’t always cut out an inclusion, but sometimes you can make it less visible.  Recutting, when it’s done right, can drastically improve brilliance, especially when you add facets (i.e. by going from a step cut to a Portuguese cut).  Windows can be closed by changing the angles of the facets.  And color can be improved too, sometimes unexpectedly so.  But each stone is different, and there are no general rules for predicting outcome.  On Etsy there are some cutters that allow you to send in photos of your gem, and they can give you a rough idea of what improvements are possible.
3.      Not all types of stones should be recut.  I don’t recommend it for most sapphires, for instance.  Ceylon sapphires, by law, are cut in Sri Lanka, and while that cutting is not always superb, Sri Lankans do know how to pull the color out of their sapphires.  Ceylon sapphires are often very light, and there’s just a little bit of color in the culet which distributes over the whole stone and makes it look dark.  If you cut away the bulk in the back, i.e. to make it fit better into a setting, you will lose the color – so the much criticized “native cut” that’s supposedly adds nothing but weight to a gem can have definite advantages.  The standard sapphire step cut, which has shallower angles, additionally preserves color.
Emeralds are also hard to cut, and they can crack – many cutters prefer not to cut emeralds for that reason.  Nowadays much of the emerald material from Colombia is very light, so it’s hard to bring out the color without also adding depth.
In general, my rule is that old mine material should be left alone unless it’s really worthless as is, or tiny.  This means that I often have to set bulky stones into settings made for diamond cuts.  So the prongs can be too short, the stone might stick out the back of the bezel, and it can move during setting because it doesn’t properly sit in the bezel, which increases the risk of breakage.  Setting colored gems, especially oddly shaped ones, is not for the un-initiated, that’s for sure.  (It’s yet another reason why I don’t accept a customer’s stones for setting.  I never know what I’m gonna get and if what the customer wants is even possible.) 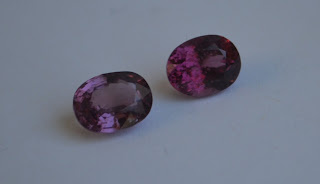