I’ve been infatuated with antique jewelry lately.  It has a delicacy and detail that you don’t find very much in the mass produced styles of today.  Last fall I started collecting and converting antique stick pins, and a month or so ago I began looking at rings.  But working with antique jewelry can be challenging.  Here’s an example of how I refurbished an old Victorian ring.
Finding antique pieces that are nice, interesting, and reasonably priced, is difficult.  Good antique dealers, especially the ones on 47th street, often know what they have and price accordingly.  Auction houses can be the same.  So I went to eBay instead.  After much sifting, I found a dealer who was selling off a bunch of busted up 1890s rings, and the one in this photo caught my eye.  I like how the cluster creates the layer of color.  This style is different from the current trend towards micro pave setting, which can only be done with diamonds anyway (other gems break and are rarely cut in that size anyway).  It’s also not like halo rings, which simply surround a (cheap) center stone with a lot of tiny diamonds.  Cluster rings are a nice “middle of the road” style that allow you to use more expensive gems in smaller sizes, but large enough not to require hours of setting labor – a reason why so much micro pave setting is done in India.
Anyway, this little ring, although dinged up and with missing stones, had a lot of presence.  It’s only 9 kt gold, which is very common for that era, but still, bidding went to over $100 before I managed to grab it.
When I got the ring, the first thing I did was loupe it very carefully.  After some thinking, I determined that all the stones had to come out. I know that antique pieces have the most value when they are left untouched, but obviously this wasn't an option. All the rubies were scratched, one was busted, one missing altogether.  Some pearls were missing also and the rest were scraped. Since pearls darken with age, finding the perfect color to match those was out of the question. The pearls didn’t appear to be glued, and they seemed genuine, which was too bad, but the gems I used instead made the ring look even nicer.
The setter almost had a heart attack when I showed him the ring and asked him to remove the gems, but insisted that the ring be left unharmed.  He had to drill out the pearls for the most part, and move the prongs that held the center cluster very carefully so they wouldn’t break off.
After that, I had the ring re-polished very lightly.  Polishing removes the outer layer of gold, and in the worst case scenario can decrease the weight of the ring.  This ring was so light that a serious polishing job was going to make it too thin.
I then began to search for replacement stones.  The settings for the pearls did not have prongs and no opening in the back, so any faceted stone was out of the question.  It would just fall out, or the setter would have had to drill holes into the ring to set them.  The tiny Burma ruby cabs that I found – which are also several decades old, did the trick, and they fit perfectly.  My setter carefully pushed the remaining gold over the cabs to hold them down, and he managed the feat without using any glue.
The center stones match the tone of the outer ones.  They are faceted, about 2.5 or 3mm, old mine cuts, which means fewer facets.  They have less brilliance but more of a glow.  Together with the outer row of rubies, they create a sea of color and make the ring look bigger than the initial ruby-pearl combo.  The result is extremely eye catching. The setting job, again, was a major challenge, because there was not much prong left in the original setting, but re-tipping them would have been visible because the gold is a funny color and 9 Kt is pretty much unavailable on the market. 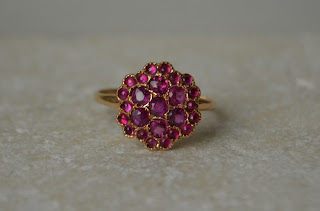 From the point of view of antique value, the ring probably has less than it did before.  It just has to be seen as its own thing.  Antiques are considered the most valuable when they are intact, and this piece has had a complete makeover.  On the other hand, it’s now a one of a kind, nearly impossible to replicate.