It has been a while since I blogged about a particular type of gemstone, but having heard some new and interesting things about tourmaline, I thought I’d share.
As many of you have noted, a lot of gemstone prices have risen sharply in the last couple of years.  But tourmaline?  Isn’t that a common gem?  Yes, it is, but world demand for this gem has gone up, especially the bright pink variety called “rubellite,” which is very popular in China.  But green tourmaline is also popular, and prices have risen correspondingly.  For green tourmaline, I would say roughly speaking, prices have doubled in the past couple of years, and for rubellite, prices have tripled.  The indicolite variety, especially brighter colors, has nearly vanished from the market.  And brighter, less sooty green and blue-green gems, demand a premium.  Anything that is bright green – even a tiny bit neon – is super expensive.
What about tourmaline treatments?  As most of you know, most of the rubellite variety is heated to intensify color by brightening the gem.  But the green variety is heated also.  Heat treatment cannot be done at home, it requires special equipment (a ceramic oven) and it takes a few days.  The heat is kept low, about 500-700F, and it has to be steadily increased over hours or days, with a longer cool down period at the end.  For this reason, labs have a hard time telling if a tourmaline is heated or not. High heat treatment in gems leaves traces in the crystal structure, low heat does not.  Most labs, including GIA, will not certify tourmaline as unheated, so unless you know where your gem is coming from or you own the rough, you should assume that the gem is heat treated.  Guesses can be made but that is all they are (the same is true of aquamarine, the more greenish variety is less often heated than the more intense blue but labs are unlikely to provide a certificate for an unheated aqua).  One way you can guess, by the way, is by looking at how clean the gem is.  Gem dealers who routinely heat tourmalines told me that if the gem is not squeaky clean, it can break or at least fracture during the heating process, and then it becomes worthless.  So gems with inclusions are much less likely to have been heated.
Results of heating a tourmaline vary.  I found a neat entry on PriceScope where you can see photos of the change of a pink tourmalines:
http://www.pricescope.com/forum/colored-stones/description-heat-treatment-process-nigerian-tourmaline-t158728.html
For greens, I can provide some photos below.  Below is a batch of green tourmaline from an undisclosed mine “somewhere in Africa.”  Next to it photos of some gems from the same batch after heating.  As you can tell from the photos, the gems got brighter but their color also changed.  The hues of blue are all but gone and the gems take on a grassier and warmer color.  They are also brighter. 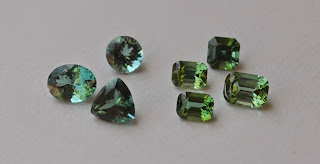 Here's how the rough looked before cutting: 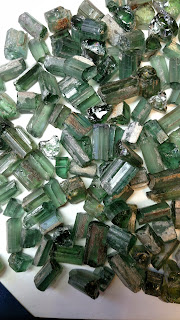