Written by Yvonne Raley
Previous / Next
Last December I pooh-poohed Tanzanite as a bad investment.  I guess I always say what I think, even if it hurts my own business...  But Tanzanite really is tricky.  Relatively new on the market (since 1967 or something), it has gotten seriously pushed by the large conglomerates that own most of the mines in Tanzania.  That’s why it now is a December birthstone, by the way.  Meanwhile, the material is overpriced, soft, and scares the living daylights out of setters.  In a ring, it won’t last long on your hand if you wear it every day.  If prong set, it should be for special occasions, or at least not be worn when you are doing heavy duty work.  Pendants and earrings are safe, rings should be bezeled but not hammer set because unless it is squaky clean it will most likely shatter the stone.  Hammersetting a gem is like taking a mini sledge hammer to a fragile object, and any minor inclusion can get busted wide open.


So then what kind of Tanzanite could I possibly recommend?  If you’re willing to stick to pendants and earrings, or a non-everyday ring (which you’ll take off when you do heavy lifting, possibly also when you sleep or take a shower), or an oval or round piece that’s safely bezeled, then I think you should buy Tanzanite that’s not been heated.


Somewhere between 2% and 5% of the Tanzanite currently mined comes out of the ground a nice minty to olivy green with purple flashes around the sides or back.  Some smaller pieces also come out a light purple.  Since Tanzanite is always very clean and sparkly, so it can look gorgeous against silver or white gold.  The other 95% are better off heated, the material is light brown or yellow and not that attractive.  Every once in a blue moon, they still find fully rich purple Tanzanite in the ground as well, but most of it has at least a green tinge to it, and even that’s rare.  So for unheated Tanzanite, what you will get is green and light purple.


And these 2-5% greenies are hard to find!  In part, because many gem sellers don’t even think about not heating their material.  Just last week, I chatted with another gem dealer about Tanzanite and he said he had some nice huge pieces but they were still green and had to be sent for heating.  When I suggested he sell them the way they are he was totally surprised.  Unheated Tanzanite is for a niche market, not mass market, it takes a bit of looking to find it, and it is available only in small quantities.  What that sums up to is: the right stone for me.  And I have been buying it.  Some photos below. 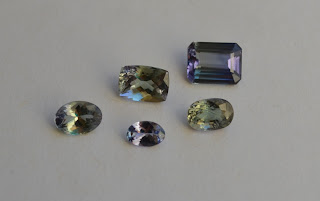 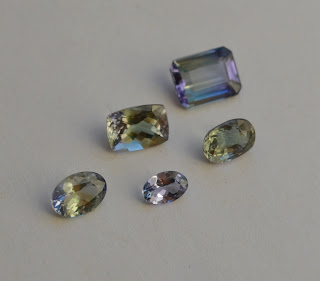