Written by Yvonne Raley
Filed under
gem show, hand carving, live demo, sonny grant, stone carving, Stone sculpture artist, Tucson gem show, tucson gem show 2016
Previous / Next
As I'm sure you know, not many thing are made in the US by hand any more, especially small arts and crafts.  It doesn't pay the rent, things can be made cheaper elsewhere.  So you might imagine my delight when I came across soapstone carver Sonny Grant at the Marty Zinn show in Tucson.  I was just strolling across the lawn of the Inn Suites hotel, where the show was hosted, to get a cup of coffee at the restaurant, when saw this guy busily sawing away at a piece of rock - soapstone, it turned out - and creating enormous amounts of rock dust in the process.
I got curious and drew closer, and a conversation unfolded.

I asked Sonny what he was working on, and he told me that the rock I was looking at would turn into an owl within the next 30 minutes.  Mesmerized, I stopped and turned on my cell phone camera (with Sonny's permission of course).  After a couple of minutes, remembering that I was originally going to get coffee, so I went indoors, and then came back.
The little owl was starting to take shape. 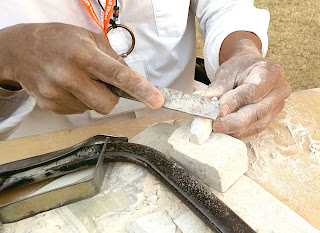 Sonny is a Tlingit Indian from Juneau Alaska.  A graphic designer by profession  (presumably the rent paying profession ,that is),  A few decades ago, Sonny became drawn to the Eskimo art of stone carving in the mediums of alabaster, marble, and soapstone.  He studied with various Inupiaq eskimo carvers and has now been making sculptures for 30 years.  Sonny also carves in wood, ceramic, slate, ivory and bone.  His small works of art are exhibited in galleries all over the US, as well as in Canada.
Sonny's tools are very simple, I took a few shots of them so you could see.  Just a saw, carving knives, chisels and rasps.  After cutting out the basic shape of the owl, he sprays it with a finish that brings out the marbled texture of the stone.  The eyes are cut of the owl at the very end.

The designs are simple as well, but that's just what I love about them.  A few curves and shapes only, but you know exactly what each thing is because its essence has somehow been captured in the stone.

I took a few little films while Sonny was working.  And - of course - I knew from the first moment that the owl had to be mine.  After all, I watched it come into existence.  I am looking at it right now, in fact, and it is sitting in the cabinet of my shelf, proudly staring back at me. 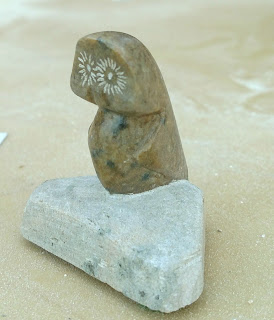 To learn more about him check out his blogspot http://sonnygrantstudios.blogspot.com/

Watch the live demo below