Written by Yvonne Raley
Previous / Next
As many of you know, I went back to Germany (and also Italy) for part of June and July, visiting family and taking a much needed break from work and jewelry. But what would a trip be without at least a little gem shopping? So I made another appointment with the Sri Lankan in Idar Oberstein who sold me those awesome spinels last summer.

This time I took my dad along for the ride. Ulterior motive: the drive Idar-Oberstein, one of Europe's main gem trading centers, is 2 hours each way. But dad had fun watching me pick out gems, pair them up on the ridge between my index and middle finger, loupe for inclusions or cracks, while he was sipping tea and trading news about world economics with Rohan, the gem dealer.

Rohan told us about a new mine near Kataragama, Sri Lanka, which was discovered at a construction site.   The mine produces Kashmir like sapphires, but with lots of color banding, so cutting has been challenging. Prices have already skyrocketed because of the Chinese economy. Apparently, many gems are being sold in Hong Kong, and fewer arrive in NY an Europe - which I can attest to, not having had access to good sapphires in over a year. Mohammed, my previous Sri Lankan source, has essentially vanished. Probably he, too, goes to Hong Kong now. Rohan, meanwhile, did buy two pieces from the new mine for a customer, but these stones are not anywhere near our price range.

Nevertheless, I lucked out as well, because some of the cute spinels Rohan had cut over 10 years ago were still available: little hexagons, square emerald cuts and trillion cuts. The smaller pairs will appear in my shop for about $75. But I also got reds this time and one or two larger pairs, which will cost more.  He increased prices a little, but within reason. 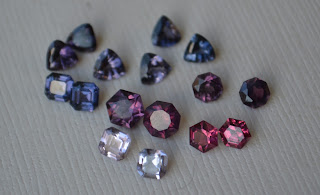 I even got a pair of 5mm hexagon green zircon and two pairs of chrysoberyl, all from Sri Lanka. In spinel, I got a lot of blues and reds, some pinks but very little purple. I also got one larger purple gem, about 3.5 carats (see the picture below).
But mainly I was interested in buying sapphires. I had hoped, and I was right, that Rohan might have some pieces stashed away that were mined and cut a while back. Ceylon sapphire, you should know, has to be cut in Sri Lanka before it can be exported. Some cuts are nice, some are not. Also, much of the material is lighter in color, so it is either heat treated or cut with a bulky pavillion for color retention, or both. I wanted the unheated of course, insofar as possible. It took two hours in total, but I eventually settled on 5 small dark pieces under one carat (one or two of these might be heated, I'll find out when I get back - heat treatment is checked under the microscope), one larger unheated medium blue (about 3.45 carat), and two large yellows, 6.31 carat or so total weight, for an awesome introductory price.

I had to pay cash - that was a drawback but this is to be expected when low prices are made. For a seller like Rohan, who usually deals in large stones only (both for private clients and for jewelry stores), who has no internet shop, no store and who does not do shows, a customer like me means quick extra money made with materials that don't see the light of day very often. Materials, in other words, that are not of interest to larger jewelry stores who want new cuts, certificates and appraisals.

In the right circumstances, therefore, this can be a win win situation. I know my sapphires very well, I know the NY market, and I know how to work with gems that don't have perfect cutting. So I think I will do well with the pieces I got, and so will you if you're interested (even though none of them will be cheap). I just wish I could go to Germany more often. There were a lot of gems I wanted to have but that had to stay behind because as you can probably surmise, I totally blew my budget for the time being. You'll have to wait a bit for the sapphire listings in the shop, but further inquiries are welcome. Before I make any prices, these babies are going to the lab. I'm fairly sure my purchase and prices were good, the seller reliable, but values change constantly and I want certainty.