Written by Yvonne Raley
Filed under
diamonds, engraving, marine, oec, old mine, old mine cut, ring, seahorse
Previous / Next
Several months ago I took on a project that involved setting a customer’s diamond, an old miner, into a ring completely designed from scratch.  My customer, Lynne F. works as a marine biologist in Florida and wanted a motif that involved sea horses.  And I wanted to see if I could make this happen.  Obviously, there’s nothing out there design wise I could borrow from, and these sea horses would have to be absolutely miniscule.  Who would make sea horses for me, and how?
After Lynne insured the diamond and sent it to me (no way I would have taken this on without the owner insuring her stone!), I made a bunch of sketches.  With help from Brandy, my assistant, CAD designer and friend, we decided there’s only one place the sea horses could go – they would have to form the seat, or gallery, or part of the prongs.  Directly under the diamond, in other words.  Lynne also wanted the culet visible, and she wanted the girdle to be above the seat, so we needed a prong setting for sure.  We sketched out some options and then took the design to another jeweler friend to get suggestions.  The ring would be high, this was unavoidable because even tiny sea horses need room.  Lynne was ok with that.


Generally, there are three ways you can make a piece of jewelry.  You can make it entirely in metal, soldering all the pieces; you can make it in wax and then cast; and you can make it in CAD and then print and cast.  CAD didn’t lend itself to this project because of the organic look of the sea horses – CAD works on a mathematical basis so geometric designs are easier to accomplish.  The challenge in metal was how to make four sea identical sea horses that would hold up the stone.  The soldering job was going to take forever, and you can’t carve in metal.  That left wax carving.  However a wax design would not allow for enough detail, which meant we would have to have that engraved in the metal as a last step.
So I set out to collect references for a wax carver and found Max, an Argentinian who owns a little jewelry shop in the East village.  We met, discussed a price, I showed him the drawings, and off went the diamond with Max to disappear for a few weeks.  Max needed the diamond because he was going to make the ring fit this stone exactly.  Obviously, these kinds of transactions involve a lot of trust!  Some back and forth later – shaving down the shank some more, adding prongs, we had the basic piece you see in the photos below.  Max was ingenious, he actually shaped the sea horses out of two pieces of round wax “wire” and then sliced off four pieces.  This way each sea horse had the exact same dimensions. 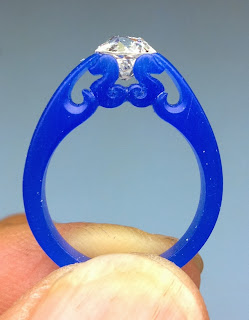 My first casting of the ring was in silver which my jeweler Vasken polished with great care (the castings often leave extra metal around these tiny shapes), and I shipped it to Lynne for her approval.  I added a similar shaped gem so she could try it out.  Wax shrinks so we also had to resize the ring a bit more.  Then we made the platinum casting.
The idea then was to add diamonds on the shank.  The center stone was a J color and the platinum is fairly white, so I initially thought to go with a lower color.  But then I settled on G/H, and as clean as possible so it would really sparkle.  I got the best cuts, too – Swiss cut, not India cut.  They cost 30% more but it was worth it.
Enter Ethan, the setter.  I got the recommendation to use him from Brandy because we wanted someone who specializes in micro pave.  Ethan works full time for a company that sets almost exclusively for Tiffany and Tiffany uses tons of micro pave.  So I got Ethan to work on my ring over a weekend, and he didn’t disappoint.  The result was near perfection.  All stones facing the right way, tables totally straight, diamonds tightly packed, the beads perfect little round balls, and no. 7 millgrain on the sides to give the ring an old fashioned look.
Engraving was last.  Again, I asked around and several roads merged with Alex, the Russian engraver.  You can see his work here: alexhandengraving.com.  Alex came here from Russia a few decades ago, where he used to help restore old churches – in particular, some of the reliefs that decorate them.  He said working in Russia met the old cliché: they pretend to work and the government pretends to pay.
Alex took his assignment very seriously.  He wanted pictures of the sea horse, and together we went over every detail: waves on the inside of the shank, adding millgrain on the inside, extending the pave down the sides of the shank past the diamonds, eyes for the sea horses.  Alex also proudly showed me other examples of his work.  All his work is done under a microscope, and the detail is incredible.  I felt in great hands.  So again, I left the ring, fully set, in someone else’s hands.  I asked if I should pre-pay the fee, and he laughed: “But I have your ring, he said.”  True.
Two more weeks went by, and I got a call from Alex.  “The masterpiece was ready,” he said.  I asked for emailed photos but he said that would not capture the work.  So I went into NY the next day.  I was stunned by the result.  I had to study the work with a loupe to fully appreciate the detail.  How can a human hand perform such a tiny miracle?

Needless to say, I now want something else engraved.  I just don’t know what.  I could do something for a cast design – the engraving has to be deeper so it comes out in the casting, but it’s doable.  Suggestions are welcome! 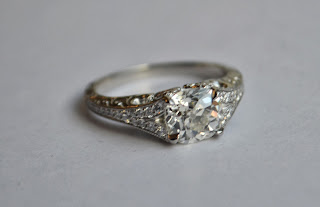 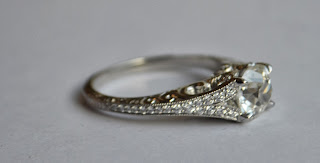